On Friday May 25 1860 a public meeting at the Fountain Hotel was called for the purpose of devising such means as may be expedient for the establishment of a Church of England in Little Eltham. The Hotel occupied the west site opposite the present day Eltham Hotel in Main Street (formerly Maria Street). The reference was to a worship building which is of course not the Church. The Church is the people of God, the Body of Christ.  They assemble for worship, usually in a consecrated building to prepare them for service and mission in the name of Jesus. In this case we are referring to people of Eltham and the surrounding district. For Anglicans of the area at this time the closest worship building was St Johns Heidelberg. It was thought to be too far to travel hence the Fountain Hotel meeting in 1860.

Our history is rich in laypersons and clergy that faithfully served God and lived lives in imitation of Christ. It has a living tradition of order and reverence in liturgical worship and as a community values the Holy Communion. In its corporate life it has a tradition of serving others and involvement with important church and societal issues of the day. It has long supported missionary and charitable organisations, such as the Australian Board of Missions, the Church Missionary Society, Anglicord and Anglicare. Its members have spoken for inclusiveness as demonstrated by its active involvement in the movement for the ordination of women and an end to discrimination of homosexuality for both clergy and laity in the Church. It has long supported theological education for the Diocese with funds and placement.

The Parish has always conducted a Sunday School although more recently called Children’s Ministry. Parishioners especially during the three decades of the post war period were active in the Mothers Union, Caritas and Young Wives. A Ladies Guild was also strongly supported. Other Parish Groups that were particularly strong in this period were the Girls Friendly Society, Church of England Boy’s Society and the Young Anglican Fellowship. During the Great European War young men of the Parish served their country in the field. The Eltham Honour Roll records 74 names of which 13 paid the supreme sacrifice. On the east wall (non liturgical) near the Roll is a memorial to Sgt. George Alfred Williams. His name also appears on the Roll as one who was killed.

Of note is that it was the laity of the Eltham and district that took the initiative to build the Church Worship Centre and then seek to have a Vicar appointed. In today’s term it was not a case of the Diocese “planting” a Church in Eltham. A prominent layperson providing leadership for the establishment of a Church in Eltham was Henry Dendy. He is often described as the founder of Brighton. But, the fact is he spent more time in Eltham than in Brighton. He left Brighton insolvent following the depression of the early1840s. He donated the land on which our Church building stands today.  He had also done so with the forerunner of St Andrews Brighton. The parsonage, now named Dendy House in his honour, also occupies our site.

[A photograph of Henry Dendy. This is one of a pair with the Dendye Coat of Arms hanging in Dendy House. Both are enlargements from a small photograph of one held by Mrs Phyllis Donaldson of Morwell a great grand daughter of Henry.]

On August 6 1860 the Architect Nathaniel Billing was asked to make drawings and specifications for the new church building (see below) and in February 1861 the bricks were ready and tenders called. George Stebbings was the successful tenderer. Bishop Charles Perry and the Architect both accepted the invitation to the laying of the foundation stone. Unfortunately Perry could not attend. This took place on Thursday 4 April. Under the Foundation stone is a bottle containing a message that reads:

[This is the original Church as envisaged by the Architect Nathaniel Billing. Note it is longer on the north wall than the existing Church. The north wall is temporary but it lasted nearly 150 years.]

Unfortunately no discernible mark or record has survived to indicate where the foundation stone is despite numerous searches over the years. On the 12 December 1861 the church building was opened and dedicated. Unfortunately Bishop Perry was unable to attend. Unfortunately no record of the opening has been found. Apparently an account was prepared and sent to “The Record” but it was never published.

On 16 May 1876 the church was consecrated in the afternoon by the Rt. Rev. Bishop Thornton of Ballarat in the name of Saint Margaret. St Katherine’s St Helena had been consecrated by the Bishop in the morning. Some confusion has ensured about which Margaret is the Patron. From the late 1930s to the mid 1970s it was considered to be Margaret of Antioch. Since then the church has considered Margaret of Scotland as Patron. The church has a stained glass window of St Margaret paired with one of  Paul. They were erected in 1918 to the memory of Mr. and Mrs. Wippel. The woman like Paul wears the halo of a saint but also a royal crown.

The Parish of Eltham was formerly a large geographical area with many centres and included Kinglake and St Helena. Even as late as July 1958 it consisted of St Margaret’s Eltham, St Matthews Panton Hill, St Mark’s Hurstbridge, The Church of the Transfiguration Research, St Andrew’s St Andrews and St John’s Hazeglen. However, in August that year the Hurstbridge and St Andrews centres became part of the Diamond Creek Parish. St Matthews  became independent in 1986 and Transfiguration was closed in 2004. In 2007 St Faiths Montmorency merged with St Margaret’s.

St Margaret’s Church and Vicarage – Parsonage (pictured below) have a Heritage Classification at the state level. It was first classified 17
September 1981, up-graded 13 July 1989 and revised classified State 3 August 1998. Heritage Victoria state that:

St Margaret’s Church and Former vicarage, Pitt Street, Eltham are important within the meaning of the historic buildings act as an early example of polychrome brick work by the respected architect Nathaniel Billings, for the historic associations between the church and early settlement of the Shire of Eltham and the connection of the building with Henry Dendy, founder of Brighton. 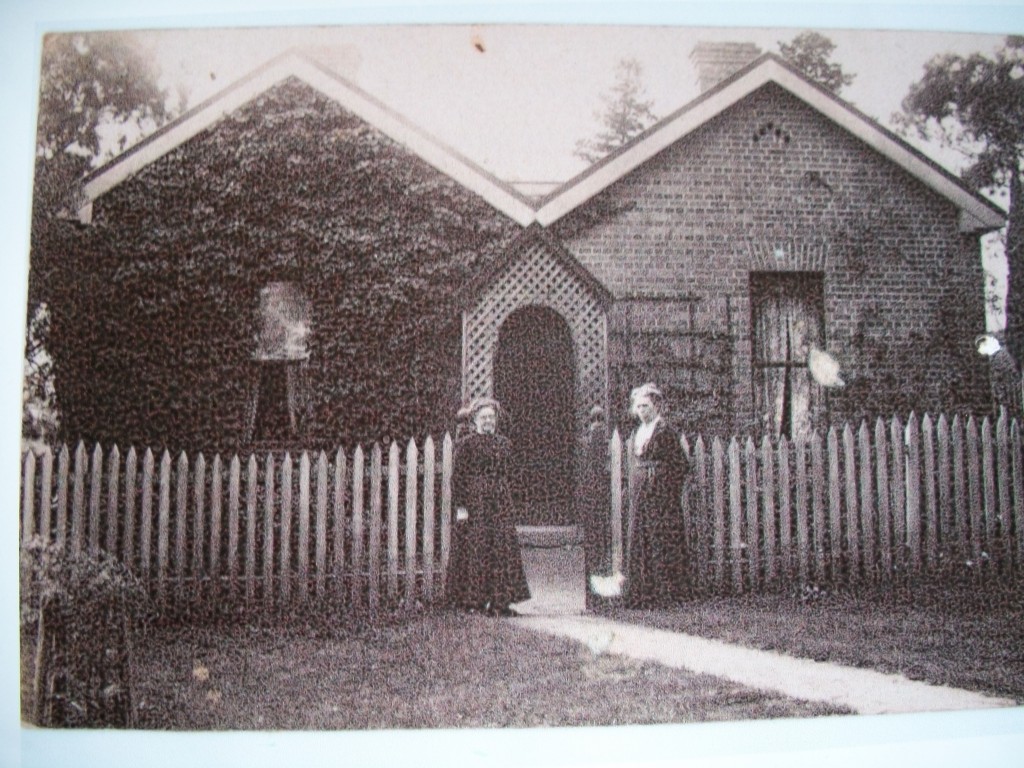 There are two liturgical objects of great significance among a number within St Margaret’s. One is the stained glass window behind the altar. In 2000 St Margaret’s received from Heritage Victoria a grant of $12000 to restore all the windows in the church. The renovators were thrilled to discover the altar window and they claimed that it is one of the first windows ever made by Ferguson and Urie. This company became famous around Melbourne for their skilled and complicated designs during the late1800s. This company only started making windows in the late 1850s so our window is an early one.

A letter (in our archives from Ferguson and Urie dated the 22 November 1861 to the Church Committee on the progress of the window mentions specifically the production of imitation ancient glass for the small end window as being  the first in the colony.Before then windows were imported from England, so our window is also Australian Made. The window cost one pound ($2).

The other religious object is a crucifix that hangs above the stained glass window behind the altar. The crucifix is a commissioned work by Matcham Skipper who resides at Monsalvat. As the Eltham Then and Now website states:

As a sculptor and jeweller Matcham Skipper has undoubtedly made a significant contribution to the artistic wealth of Australia. Over many years he has fulfilled commissions of great heritage value and crafted artworks of prize winning status which are represented in National Gallery collections throughout Australia and in museums of Europe…as a teacher and mentor Matcham has made his greatest contribution to the arts in Australia.

It was gifted to the Church by three families. On 3 March 1968 there was a service of Evensong and Dedication of the bronze Crucifix by Dr H R Smythe.

On Sunday 10 December 1961 the centenary of the opening of the church building was celebrated. The programme began with a procession from the Eltham post office. Then there was a re-enactment of the inaugural meeting at the site of the former Fountain Hotel. A re-enactment of the laying of the foundation stone was undertaken outside the church despite not knowing where the original was. A service of thanksgiving and dedication following in the church building. After the service an old fashioned Tea Meeting took place in the grounds. This was followed by a Festal Evensong at 7pm. The 150th anniversary of the opening of the church will be celebrated from December 2011.

[The Crucifix by Matcham Skipper that is now placed behind the altar in St Margaret’s Church].

During 2006 Saint Faiths was amalgamated with Saint Margaret’s and the land  sold. The Diocese permitted  substantial funds to flow to Saint Margaret’s for upgrading and  extending the church. A Site-Redevelopment Committee was established. The fruits of its  work saw the extension of the church completed 30 November 2014.  The consecration of the new worship space was undertaken 9 May 2015, which is shown in the following photograph. 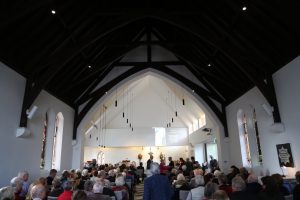 Readers are referred to our Historical Publications, the From the Parish Archives and the Clergy Honour Board